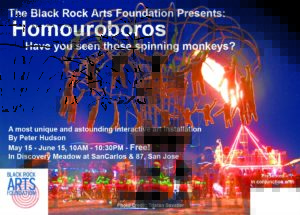 In 2006, I thought it would be fun to bring a big piece of interactive art from Burning Man to a public location in San Jose. So, I made a donation to Black Rock Arts Foundation designated for San Jose art, and we began to work it.

By the time the idea got real, it was Peter Hudson’s giant zeotrope of monkeys, that spun faster and faster from people drumming on drums, and eventually strobes illuminated monkeys swinging from branch to branch. We installed it in front of the Children’s Discovery Museum for a few weeks, and invited fire performers to come play a couple nights. The kids loved it, and so did grownups.