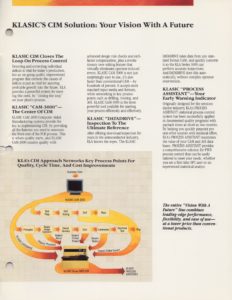 In the 1987-90 timeframe, I pioneered “closing the loop” on quality control in automated visual inspection systems used for printed circuit board and semiconductor fabrication. This meant networking together all inspection and review steps in an entire factory using a database. And, just like feedback loops in op amps studied by electrical engineers, it meant using knowledge from outputs to control earlier steps in the production process.

Networks and databases were new then even for semiconductor fabrication lines, but it worked. Instead of each defect being separately detected (hopefully) and repaired (hopefully) and forgotten (thankfully), every defect was statistically assessed in real-time in order to detect process variations and uncover causes of defects.